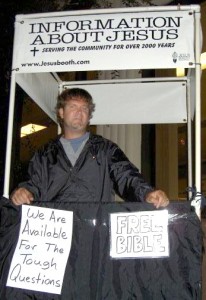 I was born and raised in a small town named Ada in Oklahoma. I attended church as a youngster and continued all through high school. At the tender age of 10, I invited Jesus Christ into my heart. At the age of 17, at the beginning of my senior year in high school, a significant event happened to me that changed my life forever. One day, while fooling around on the rooftop where I was employed, I came into contact with 12,500 volts of electricity. It knocked me off the building. I dropped two and one-half stories landing on my head. Unfortunately, the impact of the fall crushed my face and skull.

I lay on the ground for about 20 minutes before an ambulance arrived. They drove me to the local hospital, but they were not equipped to treat my injuries. They transported me by helicopter up to Oklahoma City, which was 100 miles away. The nurses and medical staff on duty all believed I would not survive the injuries. Later one of the nurses, a family friend, conveyed this information to my family. To give you an idea of how serious my injuries were my mother was called in to the hospital room to identify me. She did not recognize me. She said, “This is not my son.” This was due to the trauma to my face and skull. A moment later, she finally recognized me by the shoes I was wearing.

In the meantime, when word of my accident reached the people of my town, the church body began to pray for me. Everyone in my church community rallied together in prayer. They set up shifts and prayed throughout the night. One of the ladies in my church recalled, the Holy Spirit revealed to her that I had been healed. At that same moment, in mid-flight to the hospital, I quit screaming and moaning.

I arrived at the hospital and the doctors immediately began exploratory surgery to determine the extent of the burn wounds to the inside of my body. They could see that the electricity had caused an entrance and exit wound. It had entered through my left hand and exited through my right hip. The doctors believed it must have passed through the vital organs at least once. Typically electricity will bounce around inside the human body until it finds an exit. After examining me, the doctors determined that there was no pathway for the electricity inside my body! I had an entrance and an exit wound caused by the electricity, but there was no electrical pathway inside my body. That is an incredible miracle! They stitched me up and prepared to treat me for my impact wounds. Some of my organs were bleeding due to the impact of the fall and two-thirds of my upper body had third degree burns from the flash of electricity. The burns began healing right away without medical intervention. In about 10 days my skin was healed. After 10 days they reconstructed my skull, face and crushed forehead. One of my eyes had been moved out of place. During a 12-hour operation, the surgeons removed splinter bones and wired together the shattered bones in my face and skull. After surgery they told me I would not have a sense of taste or smell due to the injuries I sustained.

To make a long story short, within 3 weeks, I walked out of the hospital with perfect 20/20 vision; I had my sense of taste and smell. My kneecap was shattered. I had a cast on my leg. My head was shaved, with a barely noticeable surgery scar on my hairline and under my eye. What a gift from God, I was alive and did not have brain damage, I healed quickly and I did not have to go back for any follow up surgeries. The only lasting problems I have are a little pain in my knee and some scars.

It was not until 1989 that I decided to attend an intensive 6-month Christian training program at Last Days Ministry – Keith Green’s Ministry, affiliated with Youth With A Mission- in East Texas. During that time, I knew about a friend who was starting a church in West Los Angeles and I was very interested in the prospect of joining him. In May of 1990 the Lord led me to Los Angeles to be available to serve in this ministry called Metro Church. Metro later became a Calvary Chapel and is currently known as Metro Church, Calvary Chapel of Santa Monica. My service with Metro began on a volunteer basis and eventually grew to a full-time staff position. In September 1998, I was ordained as a Pastor.

I married my lovely wife Sally in 1995 and we have 3 beautiful children, two boys, and a girl. We moved to Oklahoma City in 2002